The number of straws purchased by Parliament has doubled in the last three years, official figures reveal.

SNP MP David Linden described the increase as “pretty alarming” after uncovering the information via a written parliamentary question. 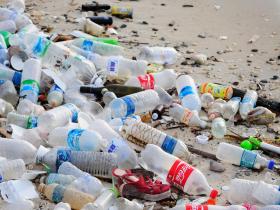 Glasgow East MP Mr Linden asked Lib Dem former minister Tom Brake, representing the House of Commons Commission, how many single-use plastic straws were dispensed by catering outlets on the parliamentary estate in each of the last five years.

Mr Brake replied: “The exact number of single-use plastic straws dispensed by catering outlets on the parliamentary estate in each of the last five years is unknown.

Mr Linden told the Press Association: “We as legislators should be taking a lead on this and the fact that the figure has doubled since 2014/15 is pretty alarming. I will be using the next session of questions to the House of Commons Commission to raise this issue.”

Mr Linden said he was prompted to ask the question following an initiative by Sunnyside Primary School in his constituency. He added he did not want to see the world’s oceans filled with plastic.

View all posts by plasticfreewells